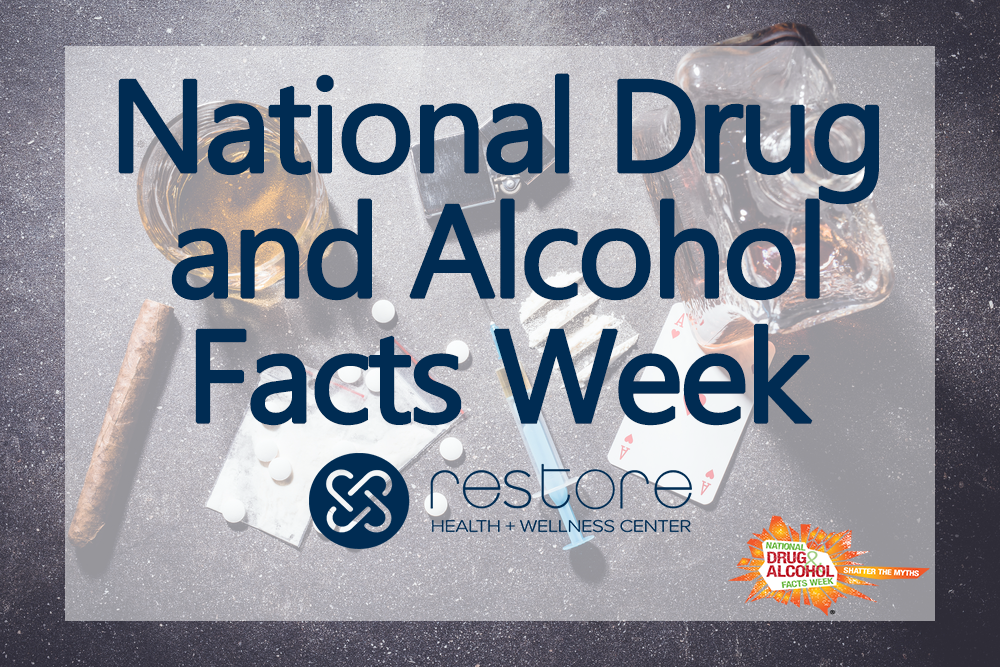 National Drug and Alcohol Facts Week (NDAFW) is seven days of a national health observance created for teens that promotes local events that use science from the National Institute of Drug Abuse (NIDA) to shatter the many myths surrounding drug and alcohol abuse. The Internet, social media, TV, movies, music and uninformed peers create a lot of myths and misinformation around the realities and consequences of drug and alcohol use. This week aims to connects teenagers with scientists and other experts to talk about the truths and hopefully, as a consequence, helps with addiction prevention in young people.

NDAFW was created in 2010 by scientists at NIDA to get the scientific facts out to young people. The National Institute on Alcohol Abuse and Alcoholism became a partner in 2016, since then the week’s events now also include events and discussions around the topic of alcohol.  NIDA’s mission is to advance the science around the causes and consequences of drug use and addiction and use that knowledge to improve individual and public health. The scientists and administrators at NIDA support and conduct basic and clinical research on drug use and the underlying neurobiological, behavioral, and social mechanisms that are consequences. They also ensure the widespread sharing of scientific research to improve the prevention and treatment of substance use disorders and enhance public awareness of addiction as a brain disorder.

Included in the week’s activities is a Drugs and Alcohol Chat day where high school students can ask NIDA scientists all of their questions about the realities behind using drugs and alcohol. This includes what causes addiction, the consequences of using and abusing drugs and alcohol, and how to help family and friends that are abusing drugs. There are also many different types of activities that community organizers and teachers can order to have at their events. Some of these activities include bingo, Lunch n’ Learns where students get to eat while they study scientific facts, assemblies, informational morning announcements, having students write a radio public service announcement (PSA), and the Chat Day.

But why participate in the National Drug and Alcohol Facts Week? Because according to the National Institutes of Health and NIDA, looking at the past month, drug use among high school seniors, more than 5% misuse prescription drugs; more than 20% smoke marijuana, and 35% use alcohol. And these numbers could be even higher in reality. The sad truth is, most teenagers are not fully aware of the dangerous risks that alcohol and drug abuse poses to their health and success in school and relationships, let alone the horrible dangers and consequences of driving while under the influence. But when teenagers are given the scientific facts about alcohol and drugs, the idea is that they will be better prepared to make good decisions for themselves as well as share the truth with their family and friends. All of the activities that you can order are available in Spanish and include information on tobacco and marijuana.

NIDA has many federal, state, and local partners working together to get the facts out about drugs and alcohol to teens in communities all over the United States of America. Partners include the Substance Abuse and Mental Health Services Administration, the White House Office of National Drug Control Policy, the Office of Safe and Healthy Students in the U.S. Department of Education, and the Drug Enforcement Administration in the U.S. Department of Justice.

We will be posting interesting and important facts about drugs and alcohol and their consequences on our social media pages all week, so be sure to check those for more information! And remember that at Restore, we have addiction recovery programs that can help you move on from drug and alcohol addiction to a life of freedom. Call us today to discuss your substance abuse treatment options and get you started on the road to sobriety. Visit our addiction treatment center in Encino, CA at 6918 Owensmouth Ave Canoga Park, CA 91303. 24/7 Admissions (818) 722-9019. On-Site Contact (818) 806-3914.