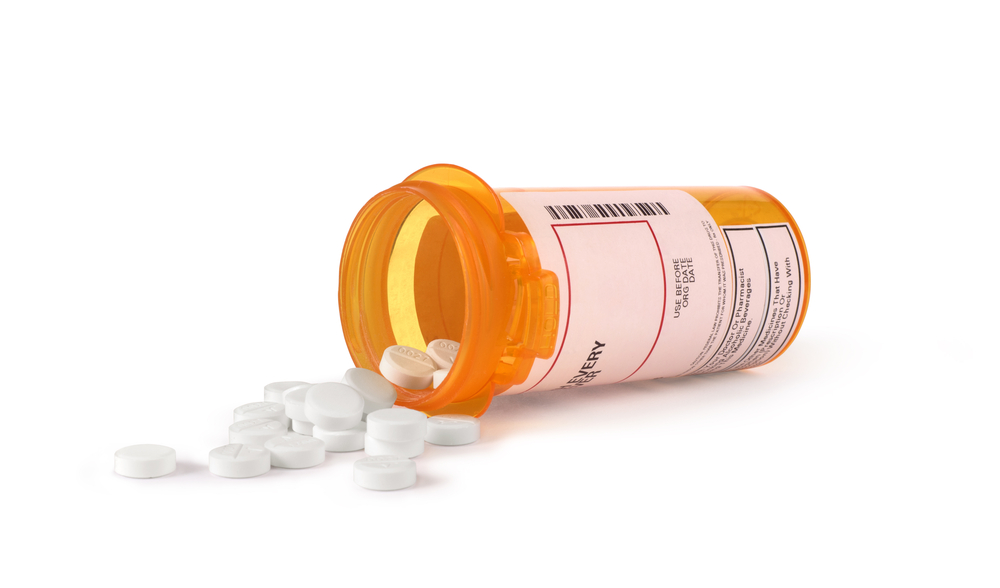 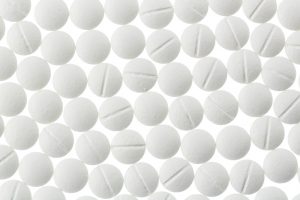 At Restore Treatment LA, we specialize in treating all forms of opioid addiction, with Hydromorphone being one of the leading opioid use disorders treated at our state of the art facility. We offer the highest quality of care to people who turn to us for help with overcoming Hydromorphone addiction. Hydromorphone is a prescription pain reliever that many doctors in hospital settings give patients who suffer from mild to severe pain. Commonly sold under the brand name Dilaudid, Hydromorphone is classified as an opioid drug and is derived from morphine.

Hydromorphone is categorized under the United States Controlled Substances Act as a Schedule II drug. Legally, this substance is seen as nearly safe when prescribed for the treatment of varying degrees of pain and taken as instructed by your doctor. Medically, this substance is accepted under restrictions guiding its use and distribution. If abused, it represents a serious threat and the user may suffer from psychological, physical and behavioral hydromorphone dependence. For a hydromorphone addiction treatment program that works, call the addiction specialists at Restore Drug Treatment Center.

History and Use of Hydromorphone

Hydromorphone was first synthesized in Germany in 1924, and two years later it was issued on the market under the brand name Dilaudid. In 2010, the United States was consuming 65% of the world’s hydromorphone. From 2010 to 2014, the number of hydromorphone prescriptions and the number of users increased exponentially. 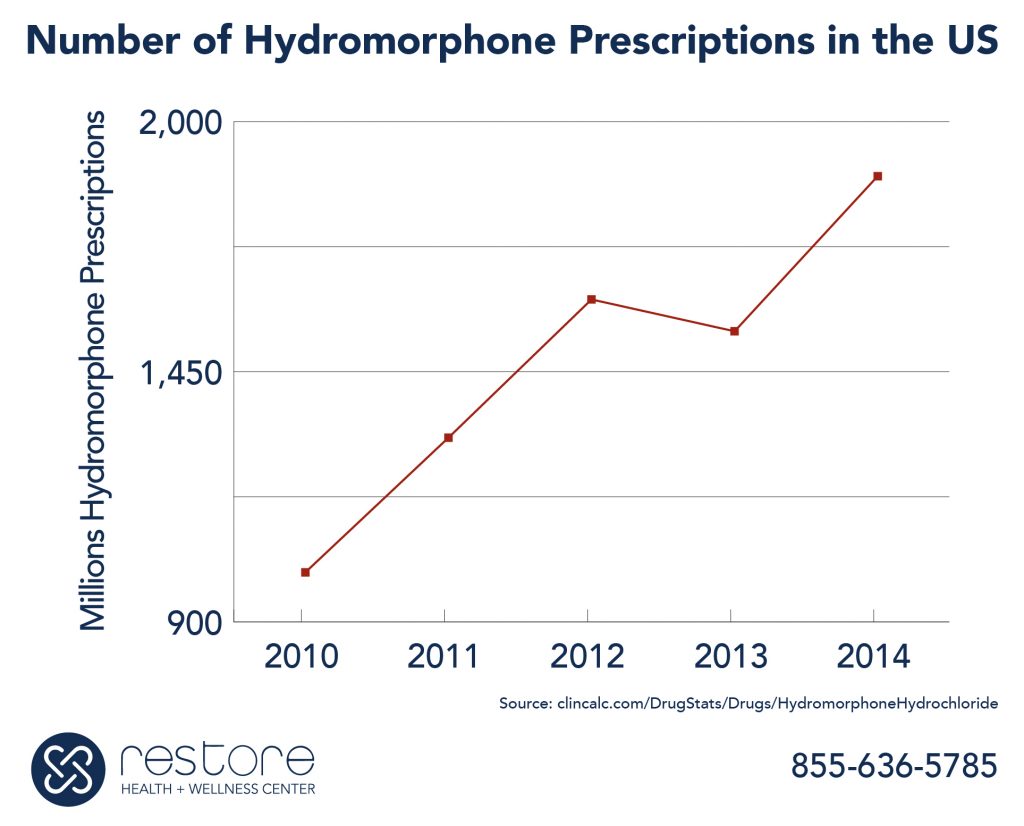 Hydromorphone is used in solving pain-associated ailments such as excruciating pain experienced after surgery. When hydromorphone is administered orally, it can take approximately 20 to 30 minutes for the drug to be digested into the bloodstream and take effect. Some people who abuse their medication or who take it for recreational use will crush the pill up into a powder and snort it for a faster and more intense effect. However, many who abuse hydromorphone prefer the administration via injection. An injection of hydromorphone takes effect immediately, as it is administered directly into the bloodstream and reaches the brain, causing the most potent high.

Hydromorphone is one of the most potent drugs, up to 8 times more potent than morphine. Prolonged use of the drug leads to the development of a tolerance, requiring the user to take higher doses in order to achieve the same results as before. Moreover, it can be easily diluted in lesser amounts of water than other drugs, and due to its high potency, small doses are needed to take effect on the user. When hydromorphone first appeared on the streets it was often mistaken for heroin, resulting in many cases of abuse and overdose.

Hydromorphone interacts with opioid receptors in the brain. While the level of euphoria the users feel is stronger when compared to other drugs, its effect does not last as long as those of other drugs. In comparison to other opioids, it has stronger effects on medulla, the area of the brain responsible for cough suppression. Therefore, this opioid has stronger respiratory depressing effects and can cause dangerously slow breathing rate. This is why hydromorphone abuse can easily cause an overdose, especially when injected. 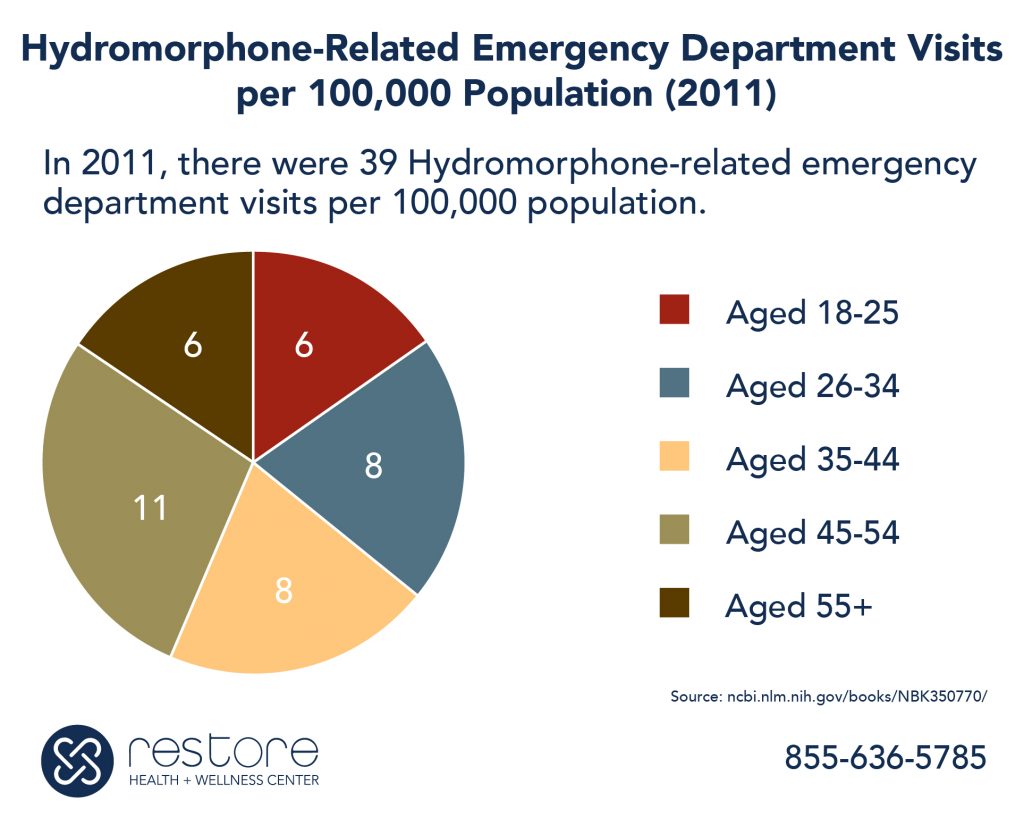 A person can abuse on Hydromorphone even when he or she uses the drug with a doctor’s prescription. Increasing the dose of the drug or the frequency of its administration to achieve the same effects as before is also considered abuse. Development of the hydromorphone dependence is gradual and typically occurs when the user is not able to do anything or cannot feel normal without taking the medication.

Hydromorphone addiction can be physical, psychological, and behavioral. Physical dependence requires the user to take the drug in order the retain the newly formed chemical balance in the body, otherwise, he or she will begin experiencing symptoms of hydromorphone withdrawal. Behavioral hydromorphone dependency develops because the effects of hydromorphone last about five hours. Therefore, people use the drug up to four times per day on a daily basis. It is easy for this behavior to become a habit the user becomes accustomed to. Psychological hydromorphone dependence occurs when the user believes they are unable to take part in everyday life or complete tasks without the drug. The person will only feel normal when taking hydromorphone, making it more difficult to stop using the drug.

In comparison to other drugs, hydromorphone has lower levels of sedation. This means that the user stays conscious for a longer period of time, increasing the likelihood of them taking larger doses, to those of which are severely dangerous.

There are many risks associated with Hydromorphone dependency, including:

Addiction: Hydromorphone abuse can lead to a physical and psychological dependency. Taking hydromorphone just once per week can lead to addiction because this substance excites dopamine production in the brain.

Health complications:  Hydromorphone, as other opioids, affects the digestive system and leads to severe constipation. Hydromorphone abuse can also cause kidney failure. The drug influences the levels of serotonin and can lead to serotonin syndrome. It affects one’s breathing rate by slowing it down, reducing the oxygen delivered to the brain. Serotonin syndrome a reduction in breathing can cause a person to suffer brain damage.

Accidents: Since drowsiness is one of the side effects of hydromorphone, it can lead to both minor and major domestic or industrial accidents. It is also recommended to avoid driving because hydromorphone can impair the user’s thinking and reactions.

Financial problems: A regular use of drugs is money consuming. Sooner or later users run into financial bankruptcy because they waste all their money on drugs, and find it difficult to work, complete projects and professionally develop.

Social problems: People who abuse on hydromorphone often begin isolating themselves from family, friends, and loved ones. They may also start lying to family members and colleagues about their hydromorphone use, or even steal the drug from their medicine cabinets. As the drug becomes the main priority in life, the person will have difficulties in maintaining personal and professional commitments.

When hydromorphone users are facing all those problems, they might develop co-occurring disorders, which are substance use disorders accompanied by mental health problems. This is why every high-quality hydromorphone treatment center should provide dual diagnosis treatment during drug addiction treatment if needed. Dual diagnosis treatment programs that we provide at Restore Alcohol and Drug Treatment Center LA are psychopharmacology, psychotherapy, behavioral management, and other.

Signs and Symptoms of Hydromorphone Dependence

Signs of hydromorphone abuse can be appetite loss, pinpoint pupils, dizziness, and loss of consciousness, itchiness, rash, muscle aches, changes in blood pressure, weakness, drowsiness, sleepiness and dopiness, lightheadedness and headaches, dry mouth, restlessness, slowed or even stopped breathing, seizures. Besides, similarly to other opiates, hydromorphone affects the digestive system, causing nausea and vomiting, severe constipation, and stomach cramps. One specific symptom of hydromorphone abuse for a user is to nod off shortly after taking the drug. A person who abuses on hydromorphone might show behavioral and physiological signs of abuse, such as:

Does Hydromorphone Rehab Begin With Detox?

The only proven effective way to obtain a fulfilling life of sobriety is through hydromorphone addiction treatment. The first phase of the rehabilitation process is typically detox – a period of time where the user stops taking the substance and allows the body to adjust without it. During this time clients are able to stop using the drug and break their physical dependence. Detoxing from any drug of abuse has its challenges, and Hydromorphone is no different. Withdrawal symptoms can be unpleasant, even to the point that some users will give up half way through the process and relapse back to their old ways. This is one of the many reasons why detox is best performed under the supervision of clinical staff at a drug rehab facility. Within several hours after the last dose, the user will likely begin to feel symptoms to Hydromorphone withdrawal.

There are a number of ways to approach the process of detox, one of which being to taper the patient off their drug of choice using strict dose reduction techniques. Over-the-counter drugs can be prescribed to manage hydromorphone withdrawal symptoms like diarrhea, nausea, and vomiting. It is very important to receive professional assistance and supervision at a hydromorphone addiction treatment center during the withdrawal period. Attempting to detox on your own can put your chances at recovery – as well as your life – at risk. At Restore Treatment LA, we help you work through the symptoms of withdrawal and the process of detox, so that you can take the next step in recovery.

Why Seek Treatment For Hydromorphone Addiction?

At Restore Drug Rehab, we offer comprehensive drug treatment programs, with the most popular levels of care available being: residential treatment, partial hospitalization, and intensive outpatient rehab. The environment in which a person chooses to undergo rehabilitation is vastly important. Although the essential therapies and counseling programs are offered in each rehab setting, the structure and approach to treatment vary significantly. Most clients benefit from residential rehab because it is more hands on, and incorporates several other therapies and treatments than outpatient programs. Other cannot commit to this level of care and opt for more flexible treatments options.

Residential Rehab: The client lives full-time in the facility for the duration of the program. 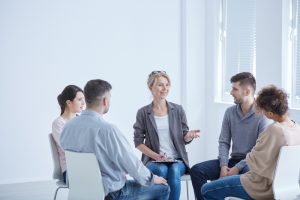 He or she will attend one-on-one counseling sessions with their assigned therapist and participate in therapeutic programs and support group meetings during their time in hydromorphone addiction treatment. The residential rehabilitation program offers a homelike setting and a community-based atmosphere.

Outpatient Treatment: This level of care does not require the client to live in the rehab facility. Instead, evening visits the facility for therapy will take place approximately 3 to 5 times each week for the duration of the program. We work with you to come up with a treatment schedule that best first your agenda, as well as your recovery plan. During these regular sessions, clients are taught to learn psychological coping skills, and way to recognize and prevent relapse triggers by avoiding high-risk situations.

People can develop a strong dependence on hydromorphone, as it is said to be more potent than even morphine. Quitting cold turkey can lead to painful and unpleasant withdrawal symptoms. For someone struggling with drug abuse or addiction, it can be both challenging and dangerous to stop using with professional help.

If you are looking to take your life back and in need of hydromorphone addiction treatment, call the Restore Drug Treatment Center today. Our addiction specialists and admissions counselors are available 24/7 to take your call and provide you with the guidance and support you need. Start your recovery from hydromorphone at Restore Treatment Center today!