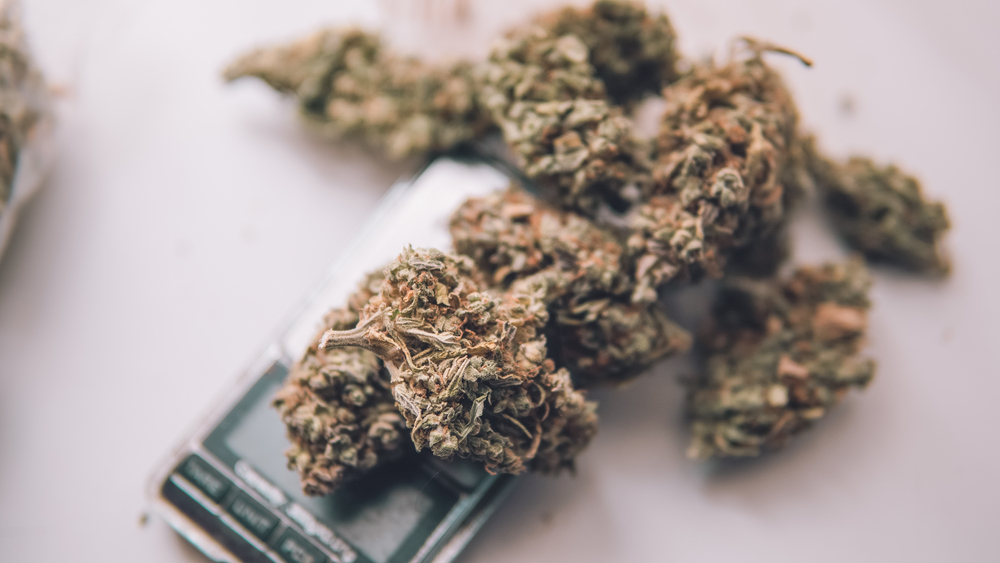 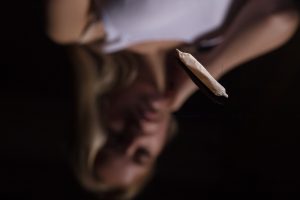 At Restore Treatment LA, we offer the highest quality of care for the treatment of Marijuana addiction. We work with you to devise an individualized plan for treatment that incorporates a set of effective programs most suitable for your needs in recovery from Marijuana dependence. Marijuana is a universally popular drug, and the most commonly used illicit drug in the United States.

Despite being deemed illegal under federal law, many states recently passed measures that permit medical use of marijuana. Though rare, some states even allow recreational use of the substance. According to the Substance Abuse and Mental Health Services Administration (SAMHSA), more than 22.2 million Americans declared to have used marijuana in the past month of the study in 2015. The US Drug Enforcement Administration (DEA) classifies marijuana as Schedule I drug, along with heroin, LSD, MDMA, methaqualone, and peyote. This means that marijuana is an addictive substance with a high potential for abuse. For a marijuana addiction treatment center that can help you or your loved one stop using, contact the admissions counselors at Restore Drug Rehab Center today. 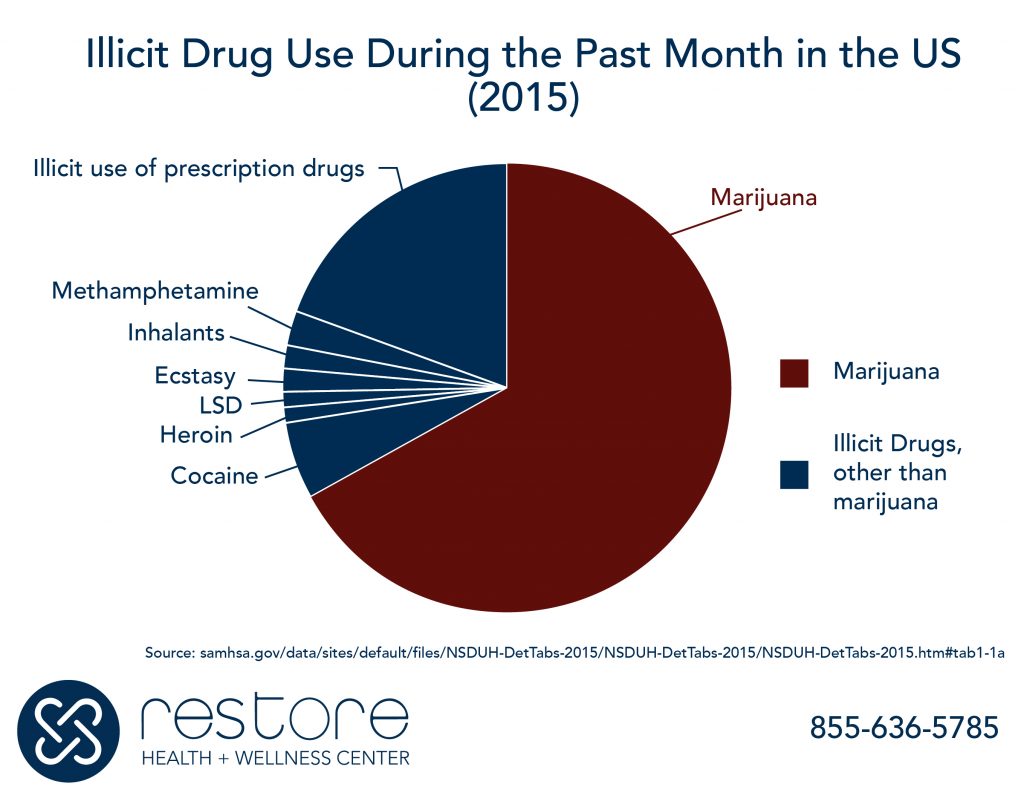 The formal name for marijuana is cannabis. The name derives from Cannabis sativa, the hemp plant that the mixture of dried leaves, seeds, flowers of marijuana comes from. There is an extensive list of street names for the drug, but it is most often referred to as weed, pot, ganja, Mary Jane, herb, bhang, bud, loud, and MJ among many others.

Marijuana is classified under several categories of drugs. Effects vary by person and strain of the drug. Out of more than 450 different chemical constituents known to exist in marijuana, there are two main chemicals:

The effects of marijuana vary by strain, and because of this, the drug is considered part of three categories: hallucinogens, stimulants, and depressants.

How is Marijuana used?

There are a variety of different ways people use marijuana, other than the standard method of smoking. Marijuana comes in several forms, including edibles, beverages, and even topical creams.

Common ways to use marijuana:

THC affects the speed of alcohol absorption. Alcohol is absorbed faster when used with cannabis, hence the increased risk of drug poisoning. Seek immediate medical assistance if you experience decreased breathing or heart rate, rapid heart rate, overwhelming fatigue, lose consciousness, or experience other unusual or alarming symptoms. In some cases, marijuana has been linked to suicide, due to hallucinations and anxiety attacks.

The effects Marijuana abuse and addiction

Prolonged and frequent use of Marijuana causes many harmful effects and consequences that must not disregard. Marijuana abuse is associated with a decline in IQ score for those who use the drug over a long period of time. The earlier marijuana use starts, the more susceptible a person is to intelligence quotient deterioration in the future. This results in higher rates of unemployment or limitations in job opportunities, such as those that offer little pay. These individuals often suffer from impaired thinking and lose the ability to learn, concentrate, or perform complex tasks. Marijuana users are no longer able to feel good without using and have a lower satisfaction of life. Consequently, they start having social problems with family and loved ones, have relationship problems. In time, marijuana users no longer care about the ways to get money for a new dose, and often times get involved in lying and stealing money and end up with financial difficulties. At the point when they need a dose to feel normal, they have a marijuana addiction. Comprehensive marijuana addiction treatment programs at Restore Drug and Alcohol Rehab Centers LA address both the physical and psychological dependence on marijuana, assuring positive marijuana addiction treatment outcomes for our clients.

The younger the user is when he or she starts using the drug, the stronger their dependence will be. Some addicts may start experimenting with other drugs of abuse for new ways to feel euphoria. This puts them at risk for a dependency on a stronger, more dangerous substance.

When a person who is dependent on marijuana attempts to stops using, he or she may start to feel anxious or depressed. This may result in co-occurring disorders, which is the situation when a mental health disorder, like anxiety or depression, coexists with a substance use disorder, like marijuana addiction.
It is easy to recognize the signs of marijuana use. Most of the users’ behavior under marijuana effects are caused by the way that the substance affects the brain.

The effects of marijuana make those who use want continually achieve that state of euphoria and relaxation. Some may abuse Marijuana in an attempt to hide from day-to-day reality. As soon as the effects fade, the reality comes back, and the person takes another dose of marijuana.

According to the National Institute on Drug Abuse, the potency of marijuana sold today on the streets has steadily increased in the last years. Today, the same dose of marijuana has twice as much THC as about twenty years ago. This leads to higher rates of marijuana abuse, rapid tolerance buildup, and increased risk for marijuana addiction. When a person needs to use larger amounts to achieve the same high, it is a sign of a dependence. When a person develops a Marijuana use disorder, they will lose control over the use of the substance and will continue to abuse it, even despite encountering consequences in life. 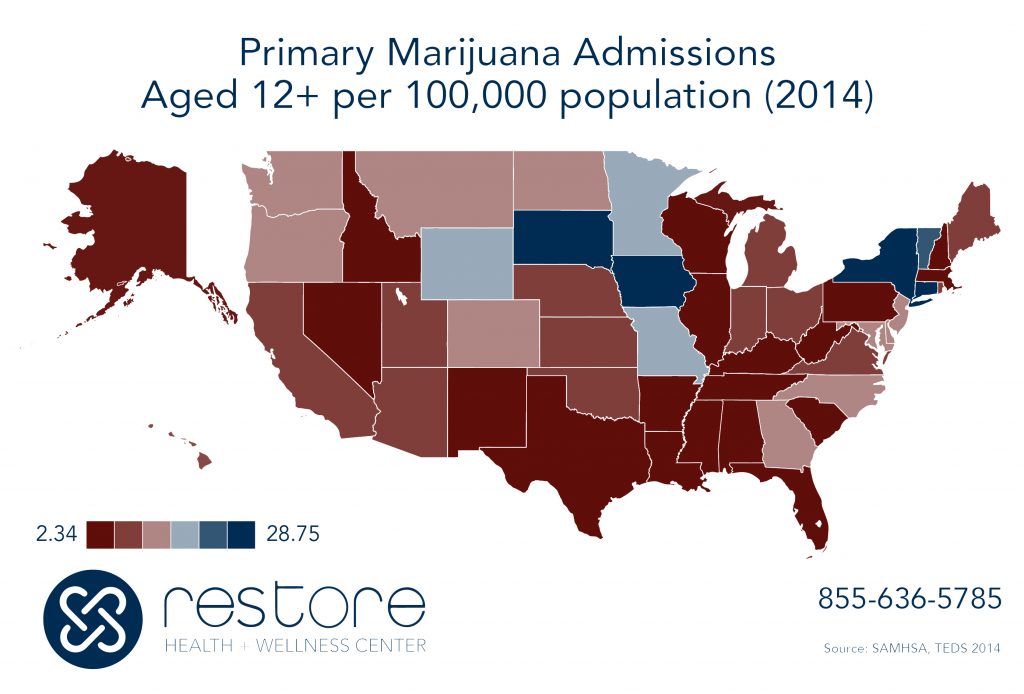 What Does Marijuana Addiction Treatment Consist Of?

Marijuana dependency does not have the same severe withdrawal symptoms as other drugs like heroin or alcohol. Regardless, a person who regularly uses cannabis might experience very uncomfortable marijuana withdrawal symptoms, some of which include:

Frequent use of marijuana, even over the course of two short weeks, can cause symptoms of cannabis withdrawal. People who have used marijuana for a longer period of time can have difficulties after quitting, as they find it hard to feel “normal” without their drug of choice. The intensity of withdrawal symptoms depends on the general state of health, usual doses, and duration of use. However, detoxification from marijuana lasts longer than from other drugs. The reason for this is that THC is stored in the fat cells. Therefore, it takes much longer for the body to completely detox from marijuana. It is very important to find the right marijuana addiction treatment program for your unique needs. Our addiction specialists at Restore Drug Rehab LA will guide you through the detoxification process, and provide you the highest quality of ongoing marijuana addiction treatment.

The most promising programs used in marijuana addiction treatment, especially when a co-occurring mental illness is present, is cognitive-behavioral therapy (CBT), contingency management, and motivational enhancement therapy. At Restore Treatment Center, we work with you to make sure all the right programs are incorporated into your recovery plan, so that all your needs are met in treatment. The main features of marijuana rehab programs that we provide at Restore Drug Rehab LA:

Besides these programs, marijuana treatment facilities should provide efficient marijuana addiction treatment and detoxification programs. Recovery is the time when the addict’s body should receive all the nutrients and minerals lost due to drug abuse. Restore Drug Treatment Center LA provide Marijuana detox and rehabilitation programs that will supervise the physical and general health condition of the recovering addict. 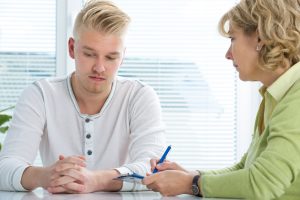 Why should you seek treatment for Marijuana Dependence at Restore Rehab LA?

Marijuana is a complex drug, which affects different people in various ways. Many of its effects and properties have not been studied fully, and this is why it is subject to disputes. Marijuana abuse affects the users’ social and professional life in the short and long term, while marijuana addiction leads to unpleasant withdrawal symptoms, and it can take months to fully detox the drug from the body. Certified Marijuana addiction treatment can help you overcome the psychological and physical dependence on the drug and give you the strength to get back on your feet. Contact Restore Drug Addiction Treatment Center LA to learn more about the benefits of starting your recovery journey at our facility.